The Curious Incident of the Falling Win Rate 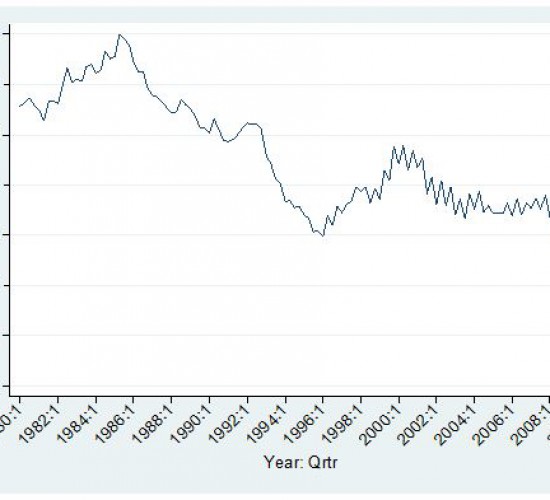 For 40 quarters starting in 1985, the plaintiff win rate in adjudicated civil cases in Federal courts fell almost continuously, from 70 percent to 35 percent, where it remained—albeit with increased volatility—for the next 15 years. We explore, and largely reject, several possible explanations for this surprising finding. Although the reason for the falling win rate remains a mystery, we conclude that courts may need to justify decisions not only in individual cases, but at a systemic level.

Between 1985 and 1995, the plaintiff win rate in civil cases adjudicated in federal district courts fell dramatically and consistently. After 1995, win rates became substantially more volatile. Figure 1 graphs the win rate, by calendar quarter of termination, from 1980 to 2009. It shows a steady rise from 1980-85, a substantial fall from 1985-1995, and variable but trendless
behavior after that. The magnitude of the drop is astonishing: plaintiffs won almost 70 percent of the cases that were adjudicated to completion in the third quarter of 1985, but won only about 33 percent of those that were adjudicated in 2009. That’s about 35 percentage point (or more than 50 percent) decrease. To get a sense of what this means, consider that if the win rate had remained at its highest level from the third quarter of 1985 through the third quarter of 2009 (and nothing else had changed), plaintiffs would have won 377,000 more cases than they actually did. At their maximal win rate of 70 percent, plaintiffs would have had to litigate for 8 more years to make up for this “shortfall.” Of course, there is nothing normatively special about that particular baseline. One could just as correctly assert that if plaintiffs had won adjudicated cases between 1985:3 and 2009:3 at the 2009:3 rate, they would have had 184,000 fewer wins than they actually did.