The Latest Thinking on Mandatory Arbitration 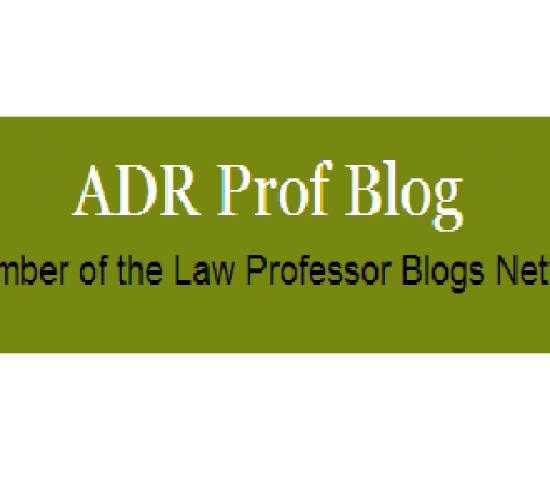 As promised Wednesday, I wanted to post about the very interesting discussion panel on mandatory arbitration put together by Hiro Aragaki and Andrea Doneff at SEALS.The format, as I mentioned, was a roundtable in which each person presented their paper briefly and then we had plenty of time for comments, questions, suggestions, and even thinking about future panels together at SEALS or the ABA next spring. Direct from each presenter, below are the list of titles of each presentation–feel free to be in touch with them directly with comments and questions. For me, I really enjoyed this and appreciate the benefit of hearing from each of these scholars as to the problem they are tackling.

Michael Green–Agency Access and Employment Arbitration–arguing that despite enforcement of FAA jurisprudence, arbitration policies that discourage or eliminate access to labor and employment agencies should be limited consistent with EEOC v. Wafflehouse.

Stephen Ware–Arbitration and the Consumer Financial Protection Bureau: A Centrist Proposal–outlining that the CFPB should pay attention to both the “adhesion” and “contract” of arbitration agreements

Ann Lipton–Manufactured Consent: The Problem of Arbitration Clauses in Corporate Charters and Bylaws–noting the interesting problem of arbitration in shareholder context

Andrea Doneff–her paper is exploring parallels between current arbitration jurisprudence and cases that followed Swift v. Tyson and preceded Erie R. Co. v. Thompkins to find lessons that can be applied to arbitration cases that today otherwise would be decided in favor of powerful corporations.

Jill Gross–Setting the Record Straight: The Supreme Court and 21st Arbitration–arguing that the Court’s uninformed and out-of-touch decisions have crafted a legal framework regulating an arbitration process that largely no longer exists

Richard Frankel–Concepcion and Mis-Concepcion: The Survival of Unconscionability after AT&T v. Concepcion

Nancy Welsh–A Judicial Invitation to Consumers to Influence the Use and Character of Mandatory Predispute Arbitration–Describes the series of meetings and communications of credit card issuers, in-house and outside counsel, and dispute resolution organizations that preceded widespread adoption of class action-barring arbitration clauses (as described in Ross et al. v. American Express et al.) and uses these events to examine ethical issues that may exist for lawyers and dispute resolution organizations as well as the emerging salience of class action-barring arbitration clauses for consumers

Also here at SEALS was Cynthia Alkon, John Lande, Kelly Browe Olson (my guide in all things SEALS), and Rishi Batra so it was quite the showing!