By American College of Civil Trial Mediators, November 9, 2018
This post has been viewed 6,727 times. 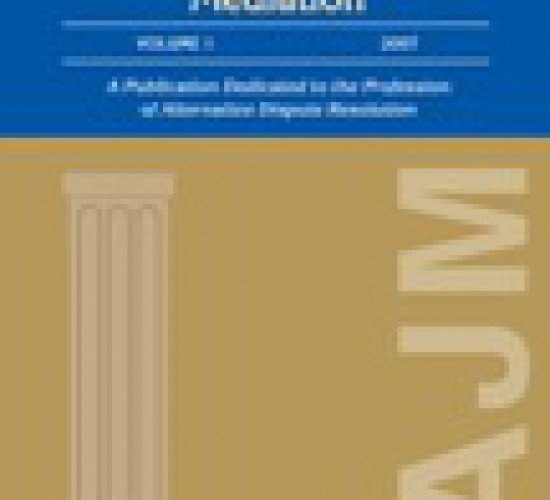 Once again, a $10,000 CASH PRIZE will be awarded to the winning submittal as determined by a panel of judges from the editors of the ACCTM American Journal of Mediation, and select members of the NYSBA Dispute Resolution Section. Winning entries will be published in the Journal and the NYSBA New York Dispute Resolution Lawyer.

This is the richest grand prize for a Law Student Writing Competition in the United States. In the last two years approximately 100 entries were received from law schools throughout the US and Canada.

The competition is open to all North American JD and LLM law students enrolled as of December 15, 2018.

Subject matter for entries can be on any aspect of alternative dispute resolution – reconciliation systems, consensus based adjudicative systems, or mixed processes. Papers can also focus on ADR process design, ADR practice techniques, case studies, ADR related legislation, ethical issues and standards, as well as the application of ADR processes to specific areas of law.

Submittals will be judged on relevance, originality, writing quality and appropriate research supporting assertions and conclusions. Manuscripts must be the work of a single author and previously unpublished. All judging will be in the blind; judges will not be provided information on the author’s identity or school. NYSBA and ACCTM reserve the right not to award any prize and to reject any submission.

While there are no firm page limits, there is an expectation that submitted works will be between fifteen and thirty double spaced pages, including footnotes. The work should be presented in 12 point Times New Roman font, on 8 ½ X 11 inch paper with one inch margins. Footnotes may be single spaced and presented in accordance with The Blue Book: A Uniform System of Citation (20th Edition).

Entries are due no later than 5:00 pm EST June 1, 2019 and should be electronically submitted in Microsoft Word Format to:

Please include full name and contact information, along with law school affiliation and class.