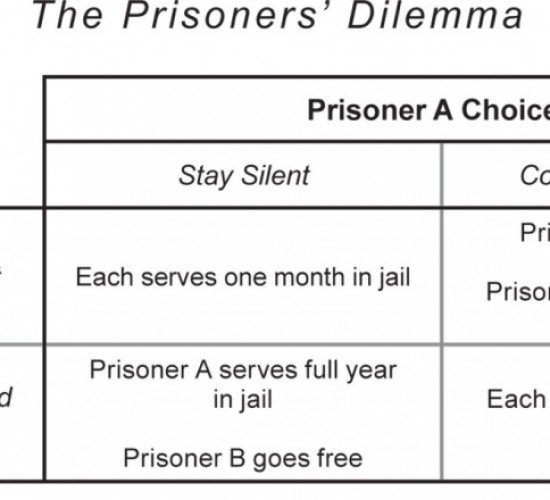 One of the most useful tools in analyzing legal rules and the policy problems to which they apply is game theory. The basic idea of game theory is simple. Many human interactions can be modeled as games. To use game theory, we build a simple model of a real world situations as a game. Thus, we might model civil litigation as a game played by plaintiffs against defendants. Or we might model the confirmation of federal judges by the Senate as a game played by Democrats and Republicans. This week’s installment of the Legal Theory Lexicon discusses one important example of game theory, the prisoner’s dilemma. This introduction is very basic–aimed at a first year law student with an interest in legal theory.

Ben and Alice have been arrested for robbing Fort Knox and placed in separate cells. The police make the following offer to each of them. “You may choose to confess or remain silent. If you confess and your accomplice remains silent I will drop all charges against you and use your testimony to ensure that your accomplice gets a heavy sentence. Likewise, if your accomplice confesses while you remain silent, he or she will go free while you get the heavy sentence. If you both confess I get two convictions, but I’ll see to it that you both get light sentences. If you both remain silent, I’ll have to settle for token sentences on firearms possession charges. If you wish to confess, you must leave a note with the jailer before my return tomorrow morning.” This is illustrated by Table One. Ben’s moves are read horizontally; Alice’s moves read vertically. Each numbered pair (e.g. 5, 0) represents the payoffs for the two players. Alice’s payoff is the first number in the pair, and Ben’s payoff is the second number. Larger numbers represent more utility (a better payoff); so 5 is best, then 3, then 1, then 0 (the worst).