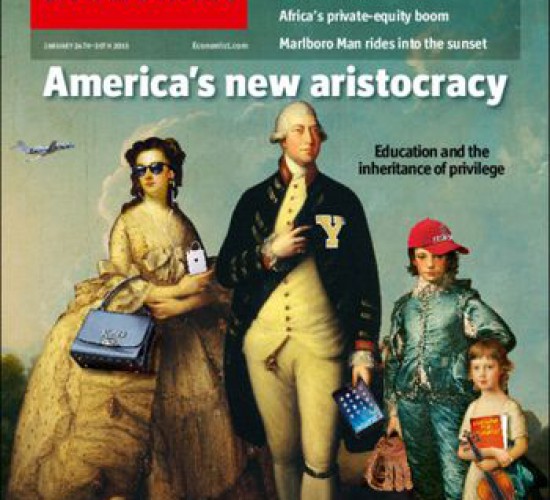 When the robber barons accumulated fortunes that made European princes envious, the combination of their own philanthropy, their children’s extravagance and federal trust-busting meant that Americans never discovered what it would be like to live in a country where the elite could reliably reproduce themselves. Now they are beginning to find out, because today’s rich increasingly pass on to their children an asset that cannot be frittered away in a few nights at a casino. It is far more useful than wealth, and invulnerable to inheritance tax. It is brains.

Intellectual capital drives the knowledge economy, so those who have lots of it get a fat slice of the pie. And it is increasingly heritable. Far more than in previous generations, clever, successful men marry clever, successful women. Such “assortative mating” increases inequality by 25%, by one estimate, since two-degree households typically enjoy two large incomes. Power couples conceive bright children and bring them up in stable homes—only 9% of college-educated mothers who give birth each year are unmarried, compared with 61% of high-school dropouts. They stimulate them relentlessly: children of professionals hear 32m more words by the age of four than those of parents on welfare. They move to pricey neighbourhoods with good schools, spend a packet on flute lessons and pull strings to get junior into a top-notch college.

The universities that mould the American elite seek out talented recruits from all backgrounds, and clever poor children who make it to the Ivy League may have their fees waived entirely. But middle-class students have to rack up huge debts to attend college, especially if they want a post-graduate degree, which many desirable jobs now require. The link between parental income and a child’s academic success has grown stronger, as clever people become richer and splash out on their daughter’s Mandarin tutor, and education matters more than it used to, because the demand for brainpower has soared. A young college graduate earns 63% more than a high-school graduate if both work full-time—and the high-school graduate is much less likely to work at all. For those at the top of the pile, moving straight from the best universities into the best jobs, the potential rewards are greater than they have ever been. …