America’s Mood Map: An Interactive Guide to the United States of Attitude 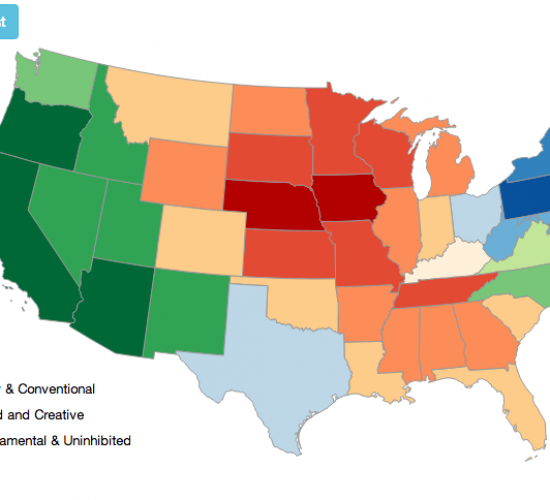 For a country that features the word United so prominently in its name, the U.S. is a pretty fractious place. We splinter along fault lines of income, education, religion, race, hyphenated origin, age and politics. Then too there’s temperament. We’re coarse or courtly, traditionalist or rebel, amped up or laid-back. And it’s no secret that a lot of that seems to be determined by — or at least associated with — where we live.

Now a multinational team of researchers led by psychologist and American expat Jason Rentfrow of the University of Cambridge in the U.K. has sought to draw the regional lines more clearly, literally mapping the American mood, with state-by-state ratings of personality and temperament.

Which State Matches Your Personality?

Using personality test data from over one million people, researchers have identified three distinct personality regions in the country. Here, each state is colored by the region it belongs to and shaded according to how strongly its personality matches that profile.