For more than a decade, the San Antonio Lawyer has published statistics on Bexar County courts.[1] This article updates those reports and provides a free online tool allowing users to run customized trendlines and graphical reports on every Texas county in near real-time.[2] In addition to data regularly reported by all district and county clerks to the Texas Office of Court Administration (OCA) as required by statute since 2010, the Bexar County District Courts (BCDC) have collected additional workload data points since 2001. While each data set may use different triggering events and categories, when normalized as a percentage of the flow of newly filed cases, the results are statistically similar and instructive.[3] That is not to say the data is perfect.[4]

The first thing that jumps out of the comparative statistics is the Bexar County workload. Bexar County district and county courts dispose of a very large number of cases per judge. OCA rolls district and constitutional county court data together in some reports, and district court numbers can be disaggregated with other reports. The combined reports offer a more comprehensive picture, particularly in smaller counties. Since we have additional data points from BCDC, more emphasis is placed on activity in those courts.

Unlike other major metropolitan counties, Bexar district judges hear civil and family matters, and a lot of them. While other metro judges also often have staff attorneys, court coordinators, law clerks, and magistrates, Bexar County judges operate lean courts. According to OCA data, fourteen district judges disposed of 1,696 civil and 10,262 family cases by what we have aggregated as Contested Dispositions (jury verdicts and bench trials, summary judgments and directed verdicts, and venue transfers).[5] The combined 11,958 contested dispositions rest right at 1,000 per month or 854 per district judge in 2017. While we are still compiling data from other counties that are slower to report,[6] that is more than twice the number of contested dispositions per judge than the thirty-five combined (twenty-four civil and eleven family) district judges processed in Harris County. So those who estimate that the presiding docket is 85% family law matters are very close; 14% of the contested dispositions were civil (non-family) matters.

Commenting on the heavy workload, Local Administrative District Judge Peter Sakai said: “Of course, there is wide variability in how much time it takes to dispose of a case. Some are quick prove-ups or name changes while others take weeks to try to verdict. Perhaps the subtler and more time-consuming docket shift has been in the complexity of the family docket. Child abuse and neglect case dispositions have steadily increased four-fold as district judges try those cases de novo with and without juries. CPS cases are often compared to capital murder cases in complexity and resource consumption.”[7] 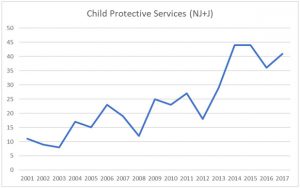 Combined Bexar civil filings continued to increase (23,146 to 24,443) while family filings softened (32,438 to 29,757) in 2017. Most of the civil filings were in district court (15,913) while 8,530 were filed in county court. The civil filing rate was steady during the year, with an uptick in August that may have correlated with certain legislative amendments going into effect on September 1, 2017. 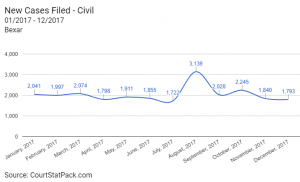 Divorce filings follow a cyclical pattern. In his new book When: The Scientific Secrets of Perfect Timing, Daniel Pink summarizes a fourteen-year study of divorce filings in Washington State, showing calendar-related spikes. Researchers found that the high season for family lawyers is January and February. Those post-holiday visits became March divorce filings as tax refunds trickle in. The same is true in Bexar County. Filings with and without children spike in March. When children are involved, filings rise again when school is out during the summer. When there are no children, divorce filings rise again in August, but not to the degree of the post-holiday bump. 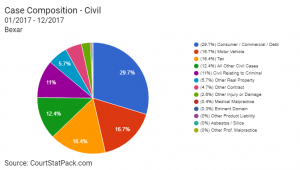 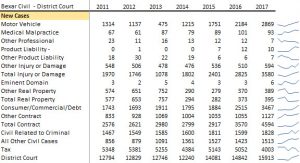 Jury verdicts and bench trials, summary judgments and directed verdicts, and venue transfers have been grouped into Contested Dispositions since the other disposition types are largely agreed, or the ultimate issue was not joined for court decision. While overall contested dispositions ticked downward, the workload per judge remains very high and workable only because most of the docket resolves by agreement. 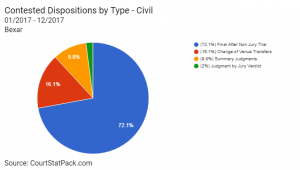 Jury Verdicts. Jury verdicts may be the most discussed contested disposition, but not the most common. Since AOC began collecting data in its current form, civil jury verdicts in Bexar have stabilized after a well-documented drop.[9] Ninety-seven juries were selected in district (66) and county (31) court. Forty-seven went to verdict (38 district; 9 county). Fifty must have settled between selection and verdict since none were directed. Since BCDC jury assignments were up ten (2016: 62; 2017: 72) and long CPS de novo trials remained high (41), the workload per court is increasing and remains at higher levels than metropolitan peer courts.

It is worth noting that Bexar County judgments on jury verdicts (OCA) were bunched in the first quarter of 2017 (20 of 47 verdicts). June and November were also busy with five each.

Seven of nine county court verdicts were returned in motor vehicle cases. The other two verdicts were categorized as real estate and consumer.

Most district court verdicts were returned in injury cases (23), with motor vehicle cases (16) dominating that category, followed by medical malpractice (3). Contract cases were next (9), with consumer (5) making up more than half of that group. Other contract (4) and other civil (5) verdicts may constitute most of the commercial cases.

Since 2011, motor vehicle verdicts have doubled (7 to 16), but total injury verdicts have fallen nearly in half (40 to 23) due to the decrease in the other injury sub-category (33 to 4). The explanation could be as easy as lawyers checking different boxes on the civil cover sheet at filing. Contract verdicts have tripled (3 to 9, with a peak of 14 in 2015) and other civil filings have also increased (1 to 5, with a peak of 11 in 2016).

Statewide district and county court jury verdicts have declined more (1,560 to 1,213) than in Bexar County.

When counties are grouped into court of appeals regions and judgments on verdicts are taken as a function of new filings, regional variability in the verdict rate emerges. Using new filings as the denominator is certainly imprecise since it is unlikely that a case was filed and tried in a single calendar year. But the flow of new cases is the most equivalent measure across counties given the noise in the retained docket numbers. This may penalize the fastest growing dockets since verdicts will trail new filings. In aggregate, though, the resulting trends are helpful, if imperfect. The San Antonio, Corpus Christi, and Austin regions are relatively similar in the 0.20% range. Counties covered by Houston’s two courts of appeals have verdict ratios roughly double the San Antonio group. Dallas region counties run even higher in the odd years sampled since OCA began collecting the data.

Since 99% of contested family dispositions are bench trials (10,423), jury assignments (23), selections (17), and verdicts (5) remain relatively constant. While the data does not indicate why there is such a drop in judgments on the verdict in 2017, it could be as simple as the decree was coded as agreed after verdict was announced. 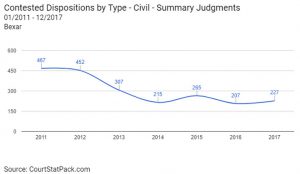 Summary judgment dispositions in county court fell much more than in district court during the OCA period. In 2011, county courts disposed of 265 cases by summary judgment. By 2017, that had fallen to sixty-nine. District court summary judgment dispositions fell, but less dramatically (202 to 158). More than half of district court grants were in consumer (83) cases, followed by total injury (25 down from 34) and other contract (4 down from 10). The number of partial grants that contour commercial cases for more precise case evaluation by the parties escapes quantification in OCA data, but no doubt contributes to the large number of settlements. 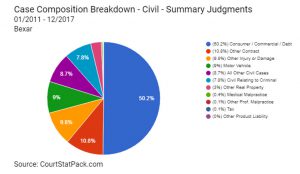 Like jury verdicts, there are interesting variations in the summary judgment disposition rate when counties are grouped by court of appeals region. The counties in the Corpus Christi and Texarkana regions again appear to have lower grant rates when new filings are used as the denominator. Grant rates appear to be higher in counties grouped in the Houston, Fort Worth, Dallas, and Waco regions. El Paso is excluded from this graph since its rate was high enough to make it an outlier that made the rest of the variations more difficult to compare.

The 90/10 maxim holds true for district court disposition bandwidth. Using OCA new cases (15,913) as the comparative yard stick again, 355 were transferred to another venue, 158 were disposed of by summary judgment, none were directed, 38 were disposed of by judgment on jury verdict, and 1,500 were disposed of by bench trial. Thus, excluding venue transfers that were disposed of elsewhere, 1,696 civil cases took most of the district court bandwidth not devoted to the crush of family law matters, including CPS dispositions (10,418). The other 90% were resolved without a contested disposition. With 99% of family and 77% of civil contested cases disposed of at the bench, each district judge must average sixty-one family and nine civil bench trials every month to accommodate the increasing workflow. The increase in civil filings may add to that weight in future years.

Bexar district and county judges are among the hardest working in the state. The combined civil and family dockets in district court result in 11,958 contested dispositions that divide 86% family and 14% civil. Civil jury trials remain largely unchanged, though there has been some rotation among the district and county courts. Heavily contested CPS cases consume even more of the heavy family docket and due to their nature further crowd civil bandwidth. But it works because the largest part of the docket continues to be resolved without a merits disposition.

[2] The Texas Office of Court Administration (OCA) started compiling data in its current form in 2010 and makes it reports available at card.txcourts.gov/default.aspx. www.CourtStatPack.com takes that data and presents it in easily customizable graphs. The spreadsheet used for this article is available at: goo.gl/4VcpF8.

[3] For a decade before the Texas Legislature required OCA to collect statistical data from the district and county clerks, the Bexar County District Courts (BCDC) collected data on cases assigned for trial. That data tracks cases assigned for jury and non-jury trial across a range of civil and family categories.

[4] For instance, there are product liability cases that have gone to trial and are not reflected in OCA verdict data. Whether the case was classified as “Other Personal Injury” on the case information cover sheet when filed or a verdict was not recorded, there are data anomalies. And local district judges hear cases in other counties and MDL matters by assignment that are not reflected in these Bexar County numbers.

[5] OCA reporting relies on civil cover sheets to broadly categorize cases and clerks to report dispositions and other data. Of course, there can be unintentional inaccuracies. Venue transfers leave the ultimate disposition to another court, but we include them in Contested Dispositions since the issue was joined.

[6] Not all counties report by the statutory deadline so there may be small data discrepancies in the statewide numbers. Bexar County does report on time and the District Clerk has been kind enough to confirm that fact and jury verdicts. BCDC has also provided accurate year-end data.

[7] A number of district judges and court personnel contributed background for this article. Of course, it was appreciated.

[8] Some shrink in jury trial data points from assignment to selection to verdict is expected. Of course, pre-trial work contours the case and often results in resolution between jury assignment and jury selection. And the trial workload is the same whether a judgment is entered on the verdict later.