The Legal Theory Bookworm recommends How Judges Think by Richard Posner.  Here is a description:

A distinguished and experienced appellate court judge, Richard A. Posner offers in this new book a unique and, to orthodox legal thinkers, a startling perspective on how judges and justices decide cases. When conventional legal materials enable judges to ascertain the true facts of a case and apply clear pre-existing legal rules to them, Posner argues, they do so straightforwardly; that is the domain of legalist reasoning. However, in non-routine cases, the conventional materials run out and judges are on their own, navigating uncharted seas with equipment consisting of experience, emotions, and often unconscious beliefs. In doing so, they take on a legislative role, though one that is confined by internal and external constraints, such as professional ethics, opinions of respected colleagues, and limitations imposed by other branches of government on freewheeling judicial discretion. Occasional legislators, judges are motivated by political considerations in a broad and sometimes a narrow sense of that term. In that open area, most American judges are legal pragmatists. Legal pragmatism is forward-looking and policy-based. It focuses on the consequences of a decision in both the short and the long term, rather than on its antecedent logic. Legal pragmatism so understood is really just a form of ordinary practical reasoning, rather than some special kind of legal reasoning.

Supreme Court justices are uniquely free from the constraints on ordinary judges and uniquely tempted to engage in legislative forms of adjudication. More than any other court, the Supreme Court is best understood as a political court.

And from the reviews:

Posner is unique in the world of American jurisprudence, a highly regarded U.S. appellate judge and a prolific and controversial writer on legal philosophy. Opinionated, sarcastic and argumentative as ever, Posner is happy to weigh in not only on how judges think, but how he thinks they should think. When sticking to explaining the nine intellectual approaches to judging that he identifies, and to the gap between legal academics and judges, and his well-formulated pragmatic approach to judging, Posner is insightful, accessible, often funny and a model of clarity. (Publishers Weekly 2008-02-11)

Posner’s latest book, How Judges Think, is important, if only because it’s Posner looking at his own profession from the inside. Two of the chapters, “Judges Are Not Law Professors” and “Is Pragmatic Adjudication Inescapable?,” are worth the price of admission by themselves. The book can be read as one long screed against the jurisprudence of Supreme Court Justice Antonin Scalia, and stands as a refutation to those who believe the category of conservative can lazily be applied to a mind as independent as Posner’s. (Barry Gewen New York Times online 2008-07-09)

A prolific and brilliant writer, Posner’s How Judges Think is perhaps his most illuminating work for its profound, and sometimes polemical, insights into the judicial process…Judge Posner’s examination of the issues is thorough, scholarly and riveting. He has written an important book–a must read not just for lawyers, but also for anyone who wants to understand how the inscrutable, and sometimes oracular, process of judging really works. (James D. Zirin Forbes.com 2010-06-08)

Originally published in 2008 and selected in honor of Richard Posner’s retirement from the Seventh Circuit. 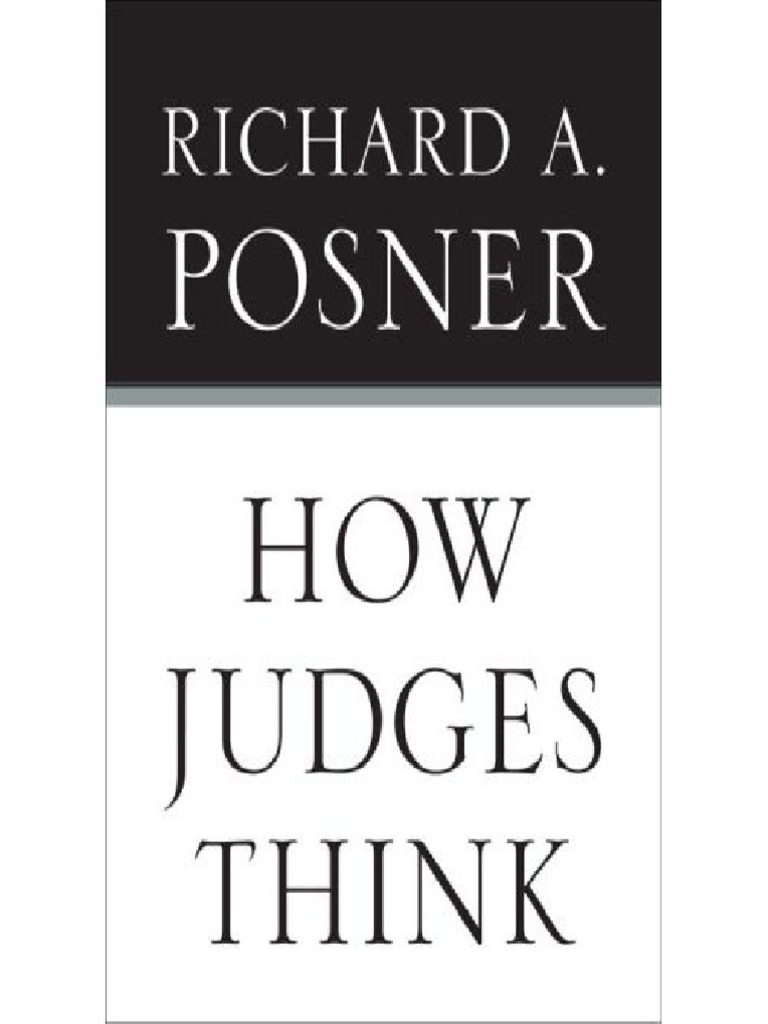