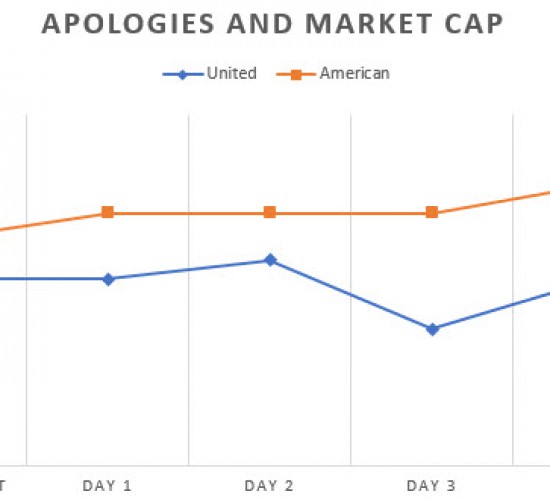 Researchers have recently studied the impact of apologies in averting and resolving disputes. But not even experimental psychologists could have arranged for rogue employees at two household brand airlines to setup quickly evolving applications of apology theory within two weeks of one another. The corporate responses could not have been more different. Neither could the public and stock market reactions. United’s inflammatory apology and inaction erased a half-billion dollars in market value while American’s immediate, specific apology and corrective action neutralized the issue.

If the Apology Doesn’t Hurt the Apologizer, It Doesn’t Help the Recipient

We knew before United tried it that general, unspecific apologies do not work. Deflect fault – especially onto the victim – and the so-called apology makes matters worse. Effective apologies include specific information demonstrating an understanding of the incident, put the apologizer at risk by taking responsibility, and inspire confidence that it will not happen again (corrective action).[i]

United initially tested the opposite approach – though not until the day after the incident. Its CEO talked in general terms about “an upsetting event” and apologized “for having to re-accommodate these passengers” in a press release. Nothing in the “apology” about the victim, Dr. David Dao, who the world had by then seen forcibly removed from their plane, though the CEO did amp up tensions by calling him “disruptive and belligerent” separately. No risk or corrective action. In fact, later the same day the CEO doubled down internally to employees, none of whom we would later learn would be fired: “Our employees followed established procedures for dealing with situations like this. While I deeply regret this situation arose, I also emphatically stand behind all of you, and I want to commend you for continuing to go above and beyond to ensure we fly right.” Public outrage was immediate. While United’s stock did not fall immediately after the video surfaced, outrage over the faux apology cost its shareholders a half-billion dollars.

Compare that with American’s response to the alleged stroller and on-board “hit-me” incident. Unlike United, American responded that day (10:15pm). It said that it had seen the video and started an investigation. It took risk and specifically addressed the affected passenger: “We are deeply sorry for the pain that we have caused this passenger.” It took corrective action. The employee in the video was immediately removed from duty and the passenger was “re-accommodated” in United’s words to first-class rather than drug off the plane to a local hospital. American hit all three important chords of an effective apology. Rather than losing value, its stock price drifted upward.

United became more sorry as its stock tanked and policymakers called for hearings. In a nod to his missed opportunity, “It’s never too late to do the right thing”, United’s CEO tried to unring the bell with a specific apology: “The truly horrific event that occurred on this flight has elicited many responses from all of us: outrage, anger, disappointment. I share all of those sentiments, and one above all: my deepest apologies for what happened. Like you, I continue to be disturbed by what happened on this flight and I deeply apologize to the customer forcibly removed and to all the customers aboard. No one should ever be mistreated this way. I want you to know that we take full responsibility and we will work to make it right.”[ii]

Moments after Dr. Dao’s lawyer and daughter spoke at a press conference intimating a lawsuit, United’s CEO tried again: “We continue to express our sincerest apology to Dr. Dao. We cannot stress enough that we remain steadfast in our commitment to make this right.”

By the end of its short course in apology theory, United had acknowledged the specific incident – Dr. Dao’s injuries and treatment by United, not “re-accommodating” passengers generally. It had put itself at risk with a specific apology to the recipient taking responsibility and promising to make it right (a confidential settlement with Dao followed shortly).

But in what may reveal internal tensions rather than corporate schizophrenia, an April 27 report sent to its (former) customers talked exclusively about operational fixes (e.g., overbooking, denied boarding, use of police in non-safety situations) without one word on United or its CEO’s handling of the situation. Paradoxically, this CEO was named “communicator of the year” by PRWeek weeks before the event. He may be, and more risk adverse constituencies circled the wagons before it became a pandemic. Had the video not gone viral, it may have been more expedient to let it blow over without having taken risk.

But it did not blow over and the damage had been done. United’s CEO is still apologizing, and getting better at it. Just today, he apologized specifically to Dr. Dao and his family for the incident and said he was personally sorry for his immediate response and that of the airline. In testimony before the Congressional Transportation Committee, he characterized his response as “inadequate to the moment” in an effort to show that the industry can police itself.[iii]

American Learned, And So Should We

Months before these two incidents, a group of highly-effective mediators looked to the way Southwest Airlines handles flight disruptions with effective apologies, quoting one response to a customer: “I don’t think I can provide you with a rational explanation for the myriad of untimely disruptions and significantly frustrating delays that occurred with your December 1 flight from St. Louis (STL). And I know that no matter what I say in hindsight, it cannot make up for the poor service you were given that exhausting day. What I can say is, you deserve a heartfelt apology from us, and on behalf of Southwest Airlines, I hope you will give me the opportunity to offer it to you ….” Interestingly, Southwest had the highest incidence of overbooking before the United debacle but handled them quite differently and has made its own changes recently.[iv]

What Can We Learn from These Two Paths?

There is evolving literature on the efficacy of apology in dispute resolution. Apology laws in some states allow “health care professionals to offer words of condolence for adverse medical outcomes without the fear of being sued for malpractice.”[v] Some commentators claim that appropriate apologies reduce the financial consequences of such suits. The two tracks United and American took seem to prove that point. But beware. United found out that general apologies that are not specific to the victim and the incident, assume risk for the apologizer, and take corrective action are worse than no apology at all.

[v] Nicole Saitta and Samuel D. Hodge, Jr., Efficacy of a Physician’s Words of Empathy: An Overview of State Apology Laws, The Journal of the American Osteopathic Association (May 2012)(jaoa.org/article.aspx?articleid=2094499).